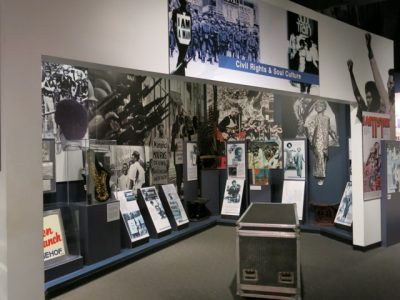 Our guest post comes from Bonnie & Bill Neely of: Real Travel Adventures Ezine – Your free online monthly travel magazine with hundreds of features and photos on travel to anywhere.

We started our special day in Memphis at the Rock and Soul Museum, where you could enjoy an entire day.  This is a Smithsonian Museum and is done in the finest way possible.  The exhibits teach through pictures, quotes, videos, and music recordings the origins and evolution of  truly American music and how it changed the South, the United States, and then the world of music.

From the Great Depression days of the 1930’s work in the hot fields of the South became increasingly a place where it was impossible to earn a living for share-croppers and descendants of slaves.  By the thousands they loaded their meager belongings onto mule-drawn wagons and headed for Memphis, the nearest big city, in hopes of getting another kind of employment and education for their children.  Singing had always helped farm hands work together in rhythm and bear the misery of the hot, exhausting field work.  These migrants brought their music with them, often accompanied by instruments they devised from washboards, pots and pans, and cane flutes.  The South was completely segregated in those years, so the Negroes settled in the area around Beale Street and set up shops and small businesses, places to sell simple home-cooked meals, and gathering places for telling stories, drinking moonshine, and resting while sharing their music.  Beale Street quickly became the center of Soul music in the South.

Today Beale Street is still the music center. Sam Phillips, a white radio announcer and disc jockey in the early years of recording, enjoyed discovering new talent, both black and white.  He made this music popular via radio, then white people started coming to Beale Street, and it became the Heart and Soul of Memphis and of American music.  Phillips discovered and recorded all time greats like Elvis Presley, Johnny Cash, BB King, and Jerry Lee Lewis. Sam started Sun Studio making vanity recordings for anyone who wanted to pay him four dollars. 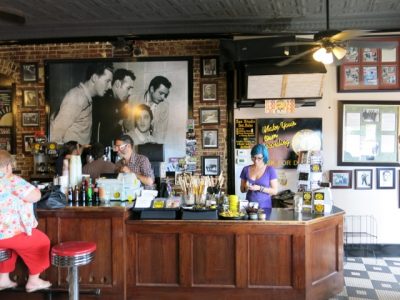 Sun Studio’s first hit was Howlin’ Wolf and then Anthony Braxton, who sang ”Rockin 88,” using a broken amplifier, which he stuffed with paper. It altered the sound and became the beginning of the Rock n’ Roll, the genre which Elvis and Sun Studios later made famous. You will learn all this and so much more at the two wonderful museums: Rock and Soul and Sun Studios. In Sun Studio, you can order your old time favorites from the drugstore style ice cream bar. Your guide will show you how and where all these famous people were recorded. You can touch some of the instruments and machines they used and finally use a mike on which Elvis sang.  These two tours are worth the trip to Memphis.

Be sure to eat lunch at the famous Blues City Café for good Southern Cooking and return in evenings for live music in the bar.  You’ll be welcomed , and you can see a pink caddy like Elvis owned, uniquely mounted on the wall of the bar.

Some restaurants have live music in the daytime.  We wandered into BB King’s Bar and Restaurant in the afternoon where we were thrilled with the concert by the first Alumni Singers of the Stax Music Academy.  We were so impressed with this, their first ever concert, that we made our way to see the Stax Museum, which unfortunately is closed on Mondays. Adjacent to it is the Stax Music Academy, which provides music 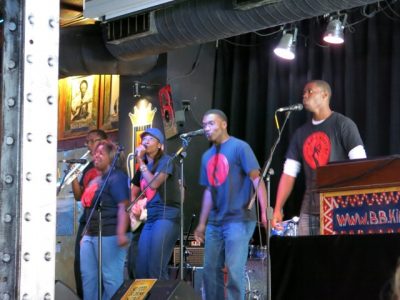 training and instruments for underprivileged promising children of Memphis schools in an after-school program and summer camp.  These children show dedication to music and are given the avenue to the joy it brings to their souls and to others.

We enjoyed a most impressive interview with Justin Merrick, a vibrant and enthusiastic young man with a Master of Fine Arts in Opera, who is the Vocal Director, Choreographer, and Operations Manager of the Academy. He loves teaching music, knowing that it can literally transform lives.  It was obvious to us that he wants to help youngsters pursue their dreams until they become a reality. He has a contagious energy and joy of life.  What an asset and role model he is for these students.

The Soulsville Charter School next door accepts by application mainly needs-based youngsters from the Memphis school system who have an aptitude for music. The school is college prep and all of the graduates have gone on to college, most with scholarships.  What a perfect location for such a school…in Memphis where for the first time in American history blacks and whites were joined together through their love of music and created the genres of Rock n Roll, Soul, Rhythm & Blues music, enjoyed by the world today.  Memphis is also where the Reverend Martin Luther King was assassinated in his peaceful dedication to bring equality to his race, and here music has accomplished that!

Of course, when you come to Memphis take a tour of Elvis’ home Graceland.  Don’t miss a walk in the park along the Mississippi River and watch the activity of this mighty byway from North to South in the near center of the USA. Children may want to take a sample of the famous river water back to their classrooms, as I did when I was in the fourth grade. You’ll see a miniature of the Mississippi River from Cairo, Ohio, to the Gulf of Mexico on the River Walk at Mud Island.