Our guest post comes from Bill & Bonnie Neely of: Real Travel Adventures Ezine – Your free online monthly travel magazine with hundreds of features and photos on travel to anywhere.

On our visit to Ostersund, Sweden, we experienced an extraordinary treat when Ostersund’s Tourism Office suggested we take an excursion to visit a Swede by the name of Sunne Haggmark, who won the Sweden Entrepreneur of the Year Award in 2001. This Moose Garden cooperates with Studiefrämjandet in Östersund and is a short drive away from town.

We drove beside the beautiful lake, keeping our eyes open for the Ostersund Monster said by legend to reside in Lake Frosen. Along the way we noticed a nice campground for RVs set among a grove of trees that bordered the lake and also took note of a snack shop and miniature golf course that we planned to return to later for ice cream and a round of golf. Just as we got to the 10 km. point, we turned right and followed a small road that came to a dead end at the front door of Sunne’s two story house and Moose Garden.

Sunne emerged from the house with a welcoming smile as well as an excellent command of the English language. He immediately escorted us over to a small pen, and to our surprise we looked down into the large brown eyes of an infant moose.

Sunne informed us that the young moose’s mother had been killed and he had rescued the calf, as he had done with a number of other orphaned moose young over the years.  He will be raising it on a bottle until the youngster was old enough to eat on his own and join the rest of the herd that inhabited Moose Garden. Sunne handed us a large bottle that he had for the baby moose and asked if we wanted to try our hand at feeding 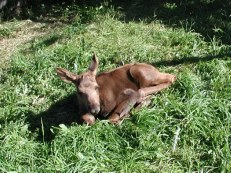 it. We were both delighted at the opportunity not only to feed the little fellow, but also to be able to say back home to disbelievers that we had actually bottle-fed a real, live moose and lived to tell the tale! Sunne explained that moose are always born as twins. He had found this baby and his twin, but the twin would not take to sucking the bottle and did not survive. He said that he had to work hard to get an infant moose to suck a bottle at first, but once they learn how they do well.

Sunne feeds the infants milk and then gets them to start eating on their own with a gruel mixture that he concocted himself. At about one month the youngster will begin to try grass and can go out into the pasture with the other moose Sunne has raised.

After finishing the bottle-feeding, Sunne said he wanted to take us to the pasture to meet his herd. We walked around his house and up a hill to a lush green meadow bordered by large trees. Out in the middle grazed a herd of what looked like eight moose of various sizes. Sunne opened the gate and motioned for us to follow him inside. We had always heard that you did not want to bother a moose, as they can be very dangerous, so we hesitated and asked Sunne about whether it was safe for us to go out into the pasture near the

herd. He laughed and said, “You are safer than if you were going into a bunch of lap dogs.” When the moose saw Sunne they immediately stopped grazing and began to go to him. We were overwhelmed at being this close to real moose. Within minutes we were patting different ones in the herd as we listened to Sunne tell about each one and how he originally got into providing a home for orphaned moose.

Sunne had been raised on a farm with all different kinds of animals and had wanted for many years to get out of his administrative job and into farming again. A friend in South Sweden called him one day and said he had two orphaned moose and wanted Sunne to have. When he went to see them, he could not resist keeping them and applied for a license that would enable him to raise them on his land. Sunne said at first the neighbors objected to his having the moose, as they too believed they would be in danger. Once the neighbors saw how well-kept and tame the moose were, these friends became very supportive. Sunne makes sure of all the proper health certifications from the state veterinarian are maintained and up to date at all times, as much for the health of the animals as for himself and the neighboring countryside.

Still in a state of awe at the fact that we had actually been interacting with real, live moose, we returned to Sunne’s house and he continued to tell us about his moose venture and his Moose Gardens. He gets visitors from all over the world and finds that people are always amazed at the gentleness of these large animals, usually only seen in the wild. Sunne actually milks the moose cows and gets about a liter of milk a day from them. The milk is high in fat and makes wonderful cheese. Sunne says he had been experimenting with making moose milkshakes using forest berries and ice, but he would not give out his recipe. He says they are delicious and in high demand!

Also he told us that moose dropping are absolutely sterile. Because moose are browsers (eating from bush tops) instead of grazers, the droppings are pure cellulose.  He led us into his kitchen where we saw moose dropping beads strung near the ceiling, like cranberry strings on a 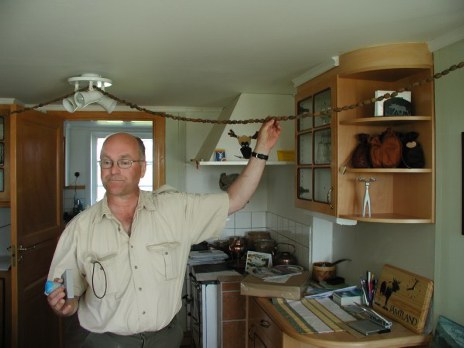 Christmas tree. By using a blender, Sunne had devised an amazingly unique way of making paper out of these pellets. He presented us with a copy of an American dollar bill on actual moose paper!

He has been invited by the government of Tanzania to work on a project of using giraffe droppings in the same way as they are also pure and sterile.  The Tanzanian government hopes this can be an economic help to its people who might make a small business from giraffe paper.  We found Sunne to be a very generous and kind-hearted man, willing to help nature and mankind in any way he could. He is also working with the Russian government over ways to improve Russia’s tourism through an attraction similar to Moose Garden.

Any visitor to the Ostersund area of Sweden will find a side trip excursion to Moose Garden and its keeper Sunne a must adventure that few people have ever experienced.