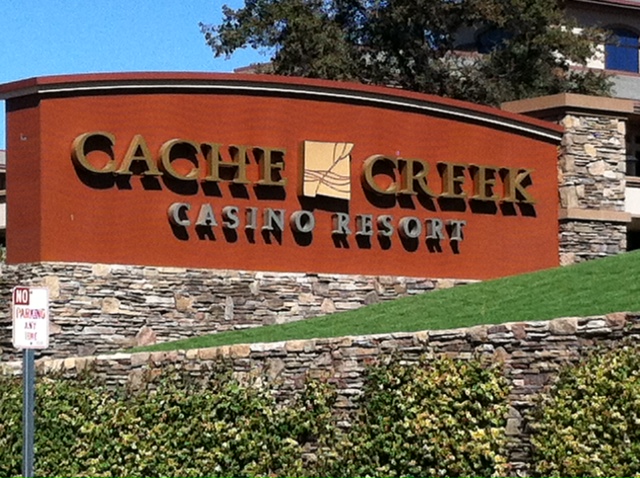 Our guest post comes from Lynn Armitage, a freelance travel writer who lives in Northern California. You can reach her at:  Boatfolk@aol.com.

In Brooks, California, in the heart of the Capay Valley, Cache Creek Casino Resort rises like an Emerald City out of acres and acres of surrounding ranches and farmland.  One minute you’re driving on a dusty, small road, passing fruit stands and cattle, and before you know it, you’re handing over your keys to a waiting valet at the entrance to this 415,000-square foot property owned by the Yocha Dehe Wintun Nation.

What started as a modest Bingo Hall in 1985 has evolved into a $200 million enterprise considered to be one of the largest casino-resort destinations in Northern California. Open since 2004, Cache Creek has enough bells and whistles to attract a steady, diverse clientele from the Sacramento and Bay Areas: a full-service casino, a 200-room luxury hotel and health spa, nine restaurants, a 700-seat indoor concert venue and seasonal 3,000-seat outdoor amphitheater, an outdoor swimming pool, casino gift shop and a tribal-operated mini mart, gas station and fire station.

The Asian-influenced hotel rooms are very comfortable and well-appointed. Stand-out features include horizontal sliding bathroom doors and thick, down comforters. Hotel employees say the rooms and suites are in such demand, that they are oftentimes completely booked even on a Sunday night.

You’ll never go hungry here, either. Resort operators had nearly every palate in mind when they created the restaurant line-up, running the gamut from Mexican food, Asian Pacific Rim cuisine, and a sports bar and grill, to a diner, deli, bakery and elegant steak and seafood restaurant called C2, where guests are thrilled by sizzling steaks and menus that light up. Many of the produce and meats used in these restaurants come from local Yolo County farms.

If you’re a golfer, the crowning experience at Cache Creek Casino Resort would have to be a day on the green at the championship Yocha Dehe Golf Club, just up and over the hill from the resort and casino. Named one of Golfweek’s 2011 and 2012 “Best Resort Courses and Top Casino Courses in America,” this 18-hole, 7,300-yard course was designed by Brad Bell, a well-known golf-course architect from Sacramento and former PGA-tour player. It was opened in 2008, and the tribal inauguration was the following year, attended by Notah Begay. 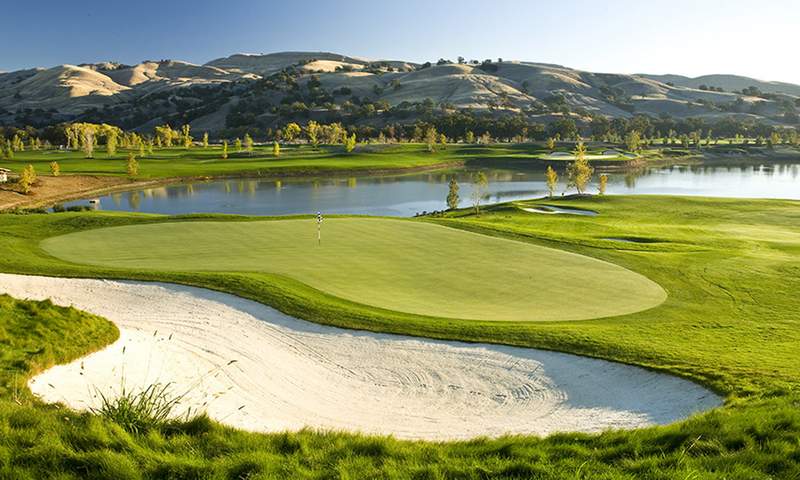 The Yocha Dehe course is known for its 19-acre man-made lake and spectacular view of the oak-tree-studded hillsides of the Capay Valley. “The area is just beautiful. There’s not a lot to distract you from the views,” Brad Johnson, head golf pro, tells us what else makes this course so special. “We’ve been described as the Pebble Beach of Norcal. I think it comes down to the guest service that we provide. It’s exceptional.”

Johnson says the guest service staff takes care of your golf clubs and pampers you from start to finish – including a mango-scented towel at the end of your round. Other special touches include cloth-bucket seats in the golf carts, as well as state-of-the-art GPS systems with touch screens that allow players to order food, signal for assistance and calculate the distance of a hole.

Apparently, it’s an experience worth a long drive.  Johnson says many of their guests come from the Bay Area, about 100 miles away. “It’s a special place and everyone who comes up here realizes that. No two holes are alike. Every hole was designed to have different challenges and different yardages.” The wildlife approves, too. It’s not unusual for golfers to see bald eagles, deer, turkey, hawks, river otters and other natural inhabitants throughout the day.

Also on the property is a practice facility, featuring a large putting green, five target greens and white sand bunkers. Plus, a pro shop and an indoor/outdoor clubhouse that overlooks the course, where guests can dine and order a glass of Séka Hills wine, the tribe’s proprietary label, made from grapes that grow adjacent to the golf course.

In keeping with the Yocha Dehe Wintun Nation’s commitment to preserving environmental balance, the water used to irrigate the course is reclaimed water treated at a state-of-the-art water treatment facility at the resort, considered among the most advanced treatment systems in Northern California.

About the Yocha Dehe Wintun Nation:

The Yocha Dehe Wintun Nation is a small, federally recognized tribe in the Capay Valley of Yolo County, California, with 62 enrolled members. Yocha Dehe means “home by the spring water.” They are descendants of the original people of the Capay Valley, and before colonization decimated its population, the Wintun Nation was comprised of 15,000 natives who had settled up and down California. The Indian Tribal Gaming Act helped turn this once poor tribe, completely dependent on the federal government, into a self-sufficient, economically independent enterprise due in large part to revenues from the Cache Creek Casino Resort. The tribe also holds interests in farmland, agriculture, cattle, wine and olive oil. It has contributed significantly to the welfare of the Yolo County community, the state of California and other native tribes. Dedicated stewards of the environment, the Yocha Dehe Wintun Nation received California’s highest and most prestigious environmental honor, the Governor’s Environmental and Economic Leadership Award, in 2003.