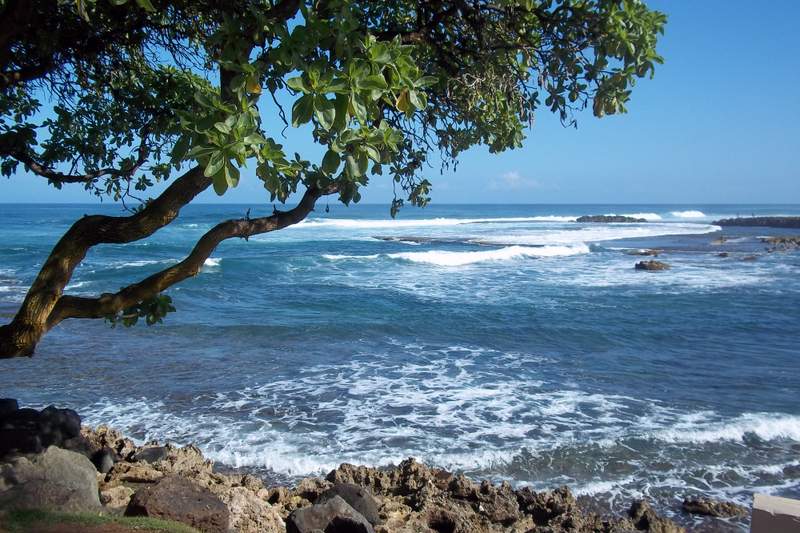 Our plan was simple:  fly to Honolulu a few days prior to sailing on NCL’s Pride of America and explore the famous North Shore of O’ahu.  An easy hour-long drive from the airport brought us to the beautiful Turtle Bay Resort, which sits on four plus miles of beachfront.  We unpacked, explored the grounds and had a sunset dinner at the poolside Hang Ten Bar, featuring burgers, salads, tacos, beer and a very friendly staff.

After breakfast at the hotel’s Palm Terrace, we strolled over to the HeleHuli Adventure Center for an eco-tour with Shaka Kayak. Following a thorough orientation, we were off to Kawela Bay, the nesting grounds for the Hawaiian Green Sea Turtle. Although it has an 80 year life-span, it is on the endangered species list.  Our knowledgeable guides pointed out the uniqueness of the area in terms of geology, ecology and history. Clear-bottomed kayaks allowed us to view marine life, coral reefs and graceful turtles gliding by and under us.  We beached for a short snack and nature walk (we saw the banyan tree from TV’s Lost).

Later we enjoyed a delightful lunch including ahi poke and kalua pork at the resort’s oceanfront, open-air Ola restaurant.  We drove to the nearby Polynesian Cultural Center, featuring the islands of the Pacific: Hawai’i, Samoa, Maori New Zealand (Aotearoa),Fiji,Tonga, Easter Island, Tahiti and the Marquesas (French Polynesia).  A very funny Samoan host made fire from kindling, told stories and shredded a coconut in seconds with his machete.  Afterwards, it was off to the sumptuous luau and the extravaganza Ha’ (Breath of Life); dancers, singers and acrobats in a retelling of Island myths in a state-of-the-art theater. 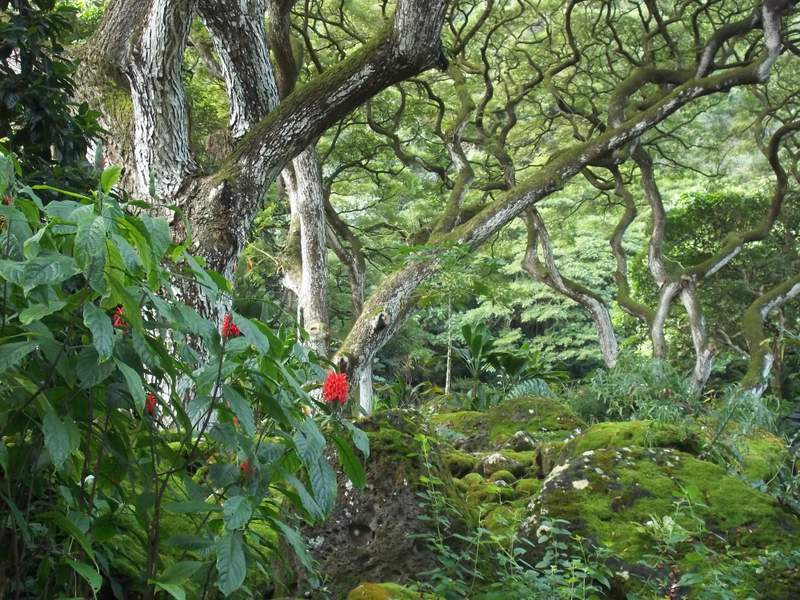 The next day we drove to nearby Waimea Falls which could be the Garden of Eden (without the snake of course – in fact, there are none in Hawaii); it is spectacular.  As we hiked, there was a light mist cooling us as we trekked to the scenic falls. When the sun broke through, the plants, flowers and ponds glistened and birds called out from the treetops.  It was at that point my wife said “I’m loving Hawaii even more this time around.”  We then headed to Waimea Bay and the Banzai Pipeline at Ehukai Beach to watch the surfers and spectacular breakers.

It was lunchtime and the North Shore has two cult-like culinary joys, the shrimp trucks (there are dozens to choose from and everyone has their favorite) and dessert at Ted’s Bakery.  Once back to the resort, we enjoyed a couple’s lomilomi massage at the Spa Luana, which also has a small fitness center and offers salon services.  Dinner that evening was at Leonardo’s for an outstanding Italian meal.

We were not ready to leave but it was cruise embarkation day.  Before we departed, we had time to go to Kuilima Cove, a sandy inlet at Turtle Bay Resort; one of the best swimming and snorkeling areas on the North Shore.  As we made our leisurely return to Honolulu, we stopped and wandered around Haleiwa Town, an eclectic mix of old and new Hawaii.

Aloha means a lot of things and, in this case, goodbye to a great resort, spectacular scenery and hello to a new adventure; part two: sailing around the Hawaiian Islands on NCL’s Pride of America.

The Polynesian Culture Center– Learn about the peoples and island nations of the Pacific Ocean atpolynesia.com or call 1-800-367-7060.

Waimea Falls-Waimea Valley consists of 1,875 acres and has been a sacred place in Hawaiian history for more than 700 years: 78 religious and house sites, shrines, agricultural terraces and fishponds have been identified.  The Valley’s 45-foot waterfall is approximately ¾ mile from the park entrance booth.  The 150-acre botanical collection contains more than 5,000 kinds of tropical and subtropical plants, including native and endangered Hawaiian species.  Go to waimeavalley.net for information.

North Shore of Oahu– Everything you want to know about the area can be found at northshoreoahu.org.