Can We Go to the Rim? 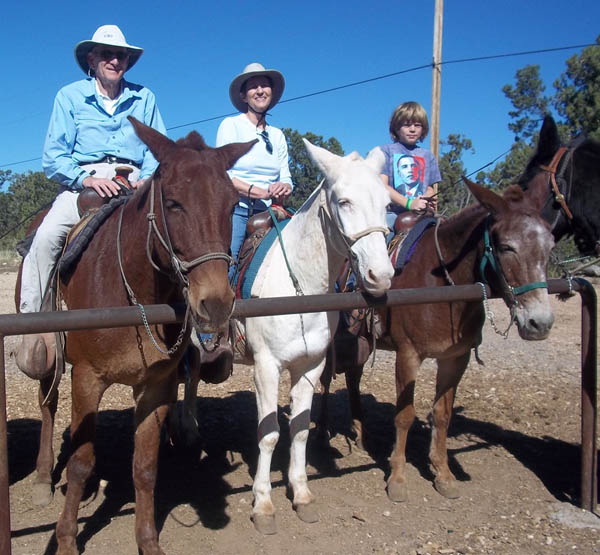 It was our grandson’s favorite question.  For two and a half days, “Can we go to the rim?” was his mantra. He was referring to the South Rim of the Grand Canyon.  My wife and I were traveling with him to celebrate his 10th. birthday.

It’s my belief that a grandparent’s role is to build memories for their grandkids; so planes, cars, trains, buses, and mules became part of a great adventure. On a bright sunny day we met Isaac at the Phoenix International Airport, picked up a rental car and our escapade began. We drove to Williams, AZ for the first leg of our journey.  There, we stayed at the Grand Canyon Railway Hotel prior to traveling by train to the national park.  Our room was large and comfy.  A roaring fire in the lobby added to its ambience and charm.  Since we had booked a package, meals were included.

There’s nothing better than a dinner buffet for a growing boy – lots of food choices with no parents around. After breakfast the next morning, we packed and headed to the train depot. We met up with our fellow travelers for an orientation, plus a big surprise: a Wild West shootout.  The Grand Canyon Railway first traveled to the South Rim in 1901.  Today, the vintage cars and engines have been lovingly restored to their past glory.  Once aboard, the rocking motion and clickety-clack of the tracks brought back a lot of memories for me and, I’m certain, made new ones for Isaac.  During the leisurely 2 ½ hour journey, the scenery slowly changed from wide-open prairies and vistas to pine forests.  Food was available in the club car and old-time western musicians and entertainers strolled up and down the aisles. 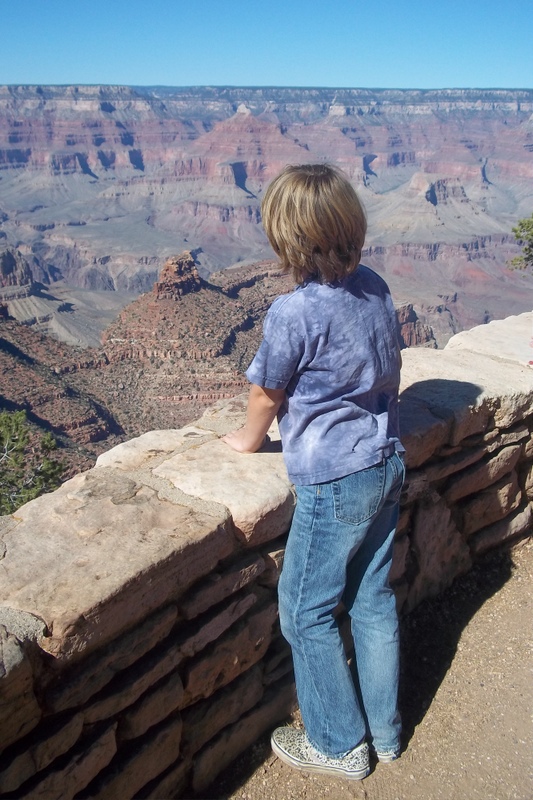 Immediately after arriving at theGrand Canyon, we boarded a tour bus for our first glimpses of the South Rim from several major vantage points. The day was bright, cool and clear, perfect for sightseeing. As our knowledgeable guide pointed out the highlights, it was wonderful to see the look of awe on our grandson’s face as he took in the spectacular vistas.

After we checked into the Maswik Lodge and unpacked, Isaac asked “Can we go to the rim?”  We discovered that we had a short walk to what was to become our most visited viewpoint of the canyon.  Evening was settling in as we approached and it was remarkable to watch the colors change on the canyon walls as the sun was descending.  It was one of several inspiring moments we were to experience during our visit and the entire day was a great start to building memories.  After a good night’s sleep, as we were heading to breakfast, we again heard the magic words, “Can we go to the rim?”  Of course, that’s what we did.

Now, for a family secret:  my wife does not like animals, particularly large ones.  In spite of that, for Isaac’s sake, she had committed to a three hour “Abyss Overlook Mule Ride.”  After the wranglers provided an orientation, I pulled one aside and asked for a favor.  When mules were assigned riders, I got one named Brownie, Isaac’s was Tater-Tot but when my wife was introduced to “El Diablo” all hell broke lose.  “Not going to happen!” she exclaimed.  “I am not going to ride a mule named “The Devil.”  At that point, another wrangler looked into the corral and loudly stated, “I can’t believe you are bringing El Diablo out again after what happened last week.”  As my wife looked plaintively at me for help and then at our grandson (who was in on the caper), she realized what was going on; everyone laughed, she mounted El Diablo, aka Crackers, and off we went.  We traversed the historic Santa Fe Railroad tracks and then into a Pinyon Pine forest.  We stopped at the Abyss Overlook and enjoyed a view of its spectacular 3,000 foot vertical drop and the surrounding pinnacles, buttes and mesas. 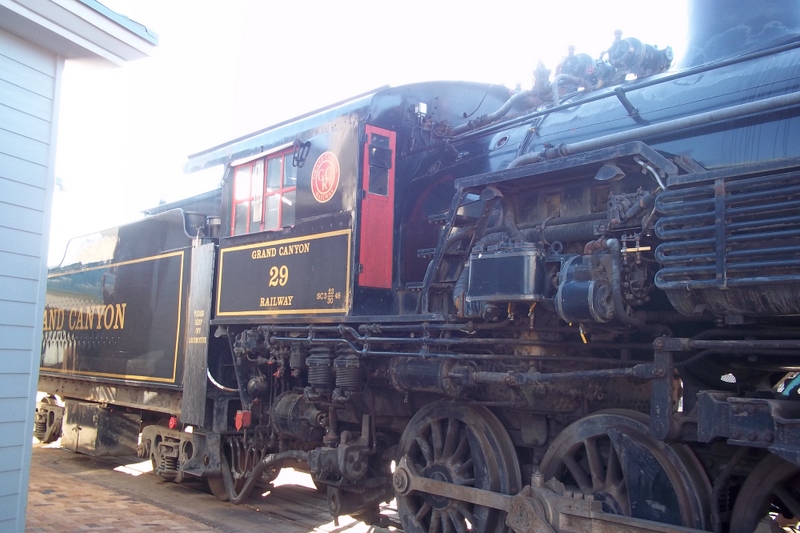 After a 30 minute break for photos, exploring and a snack, we circled back to the livery barn.  As soon as we dismounted, the question “Can we go to the rim?” was asked.  And again, we did.  Afterwards, we visited the Kolb and Lookout Studios, El Tovar Hotel and the Hopi House.  When we finished, we walked to the rim one last time before our relaxing train ride back to Williams, AZ.   During our return, I asked Isaac, “What was your favorite activity?”  The answer was delivered with a huge smile, “Pa, of course, it was going to the rim.”  Memory building accomplished…

Travel Tips: TheGrand Canyon, www.nps.gov/grca, is the biggest canyon on earth: 277 miles long and 10 miles wide. The weather there can be tricky; cold in the morning and hot in the afternoon.  What’s the solution?  Take layers.  You will be doing a lot of walking/hiking, so footwear is an important consideration.  My choices were Teva’s Raith Mid eVent paired with hiking socks by Teko; a perfect combination (www.teva.com and www.tekosocks.com).  For information regarding the Grand Canyon Railway, logon to www.thetrain.com.

Special Note:  A much younger grandson got the mini-version of the train ride aboard the Columbia Star in Columbia, MO.  It offers a wonderful four-course dining experience while traveling on beautifully appointed vintage 1930’s and 40’s passenger cars and watching as the Missouri landscape rolls by.  I highly recommend it. They also have a Sunday brunch excursion.  Logon to www.dinnertrain.com for information and reservations.