Play Ball, and Play in Phoenix and Scottsdale

Our guest post comes from Howard Hian who was recently awarded a Gold Medal/First Place Award from the North American Travel Journalists Association’s annual international writing contest.  His prize winning story, Houseboating with My Pirate Pals, was in the Intergenerational Travel category.  In 2010 he also received a second place award in the Cancun International writers competition for his feature, Quintessential Quintana Roo. Hian was recently named as the San Diego Hotel Motel Association’s “Allied Member of the Year” for 2011 for his ongoing contributions to the city’s tourism industry through his travel writing.

Since 1947 the Cactus League, has been key to major league baseball’s spring training. This month, fifteen teams, including all of the clubs from California, play ball in the Phoenix/Scottsdale area. The league’s newest stadium is Salt River Fields at Talking Stick in Scottsdale. It is a hub of Cactus League activity with both the Diamondbacks and Rockies calling it home.

What to do? Here are several sightseeing suggestions for before or after a ballgame. A pilgrimage to Taliesin West, Frank Lloyd Wright’s desert masterpiece, is a must. It is a National Historic Landmark in the Sonoran desert and home to architectural students from around the world. For a treat, we spent a lazy afternoon at the Spa Avania at the Hyatt Regency followed by an eclectic “Wine Me Dine Me” feast at their Southwest Bistro. Diners watch the proceedings in the open kitchen as the chef and his staff prepare a four-course meal that includes tequila and wine pairings.

The Musical Instrument Museum, touts itself as “the most extraordinary museum you’ll ever see.” It is. Their collection includes over 15,000 musical instruments from almost 200 countries and territories, as well as ethnic, folk and tribal displays. Grab a wireless headset and roam the wide-open spaces, listening to music from around the world while watching videos of musicians. The 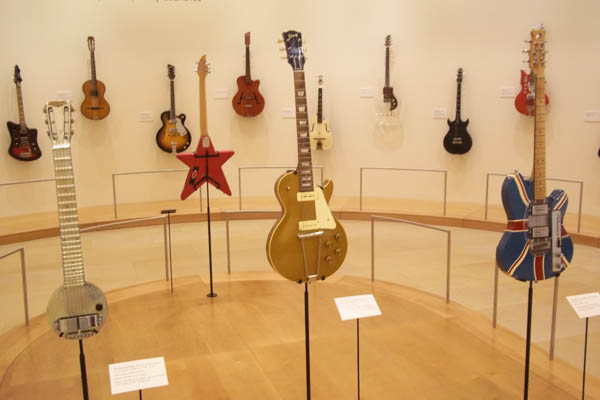 Arizona Science Center can be found in downtown Phoenix’ Heritage & Science Park. It houses the Dorrance Planetarium, an IMAX Theater, along with four levels of permanent and rotating exhibits including over 300 that are hands-on. A calendar of events, hours, etc., can be found at www.azscience.org.

The South Rim of the Grand Canyon is approximately four hours by car from Phoenix. Instead of driving, take the Grand Canyon Railway, for an extended stay. This year Arizona is celebrating 100 years of statehood. There are events commemorating the centennial throughout 2012.

More about the Scottsdale Resort & Conference Center: Our dinner at the Palm Court, a Four-Diamond award winner, featured classic American cuisine in a casual yet elegant setting. The ambience, great views, extensive wine list, tableside dining with excellent presentation and food added up to a superb evening. We started with a chopped Caesar salad and outstanding lobster bisque. My wife and I shared risotto and scallops for our entrees and ordered two decadent desserts (flourless chocolate cake and flambéed bananas Foster). The finale was flaming coffee Diablo. Their Sunday brunch is superb; buffet tables laden with salads, shrimp on ice and smoked salmon, breakfast items and pastries, cheese platters, hot entrees, carving and omelet stations, freshly baked breads, fresh fruit, fabulous desserts and free-flowing champagne. Although there is a resort fee, it is reasonable. Guests receive in-room Wi-Fi, free local calls, weekly newspapers, parking, entrance to the fitness center and tennis court and bike use. For great deals and Spring training packages logon to www.thescottsdaleresort.com. Ask about their USO program for active military.