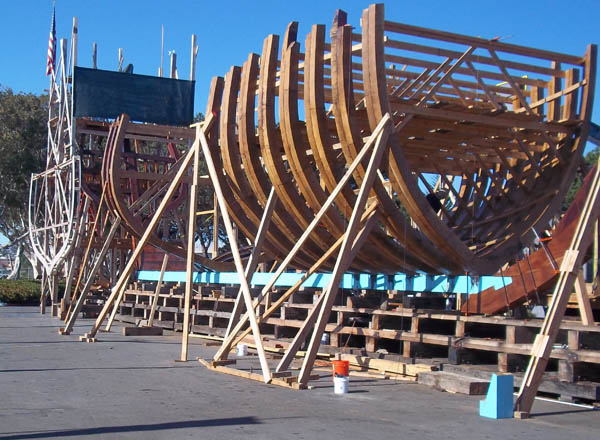 Our guest post comes from Howard Hian who was recently awarded a Gold Medal/First Place Award from the North American Travel Journalists Association’s annual international writing contest.  His prize winning story, Houseboating with My Pirate Pals, was in the Intergenerational Travel category.  In 2010 he also received a second place award in the Cancun International writers competition for his feature, Quintessential Quintana Roo.

San Diego’s Maritime Museum is building an exact replica of Juan Rodriguez Cabrillo’s flagship, the San Salvador. It was the ship which first sailed into San Diego Harbor as part of the Spanish exploration of the West Coast. During construction, it can be visited on Harbor Drive near the airport.

When completed, it will be on exhibit as part of the Museum’s fleet of historic ships and, from time to time, will sail along the California coast. Fun facts: Its estimated date for completion is November, 2013. The cost is $6 million and it will weigh 200 tons including 175,000 pounds of lead for ballast (Cabrillo used rocks!). Nine different types of wood will be used in its construction. More can be found at: www.sdmaritime.org; go to the San Salvador page. Note: They are looking for volunteers to help build the ship.

Throughout the month, 40 San Diego area museums, cultural attractions and historical sites will be offering half-price admission for up to four guests. Some of those included are the USS Midway, the Maritime Museum and the New Children’s Museum; The Museum of Contemporary Art and Birch Aquarium at Scripps Institute of Oceanography in La Jolla; LUX Art Institute and the San Diego Botanical Garden in Encinitas; 13 world-class facilities like the Mingei International Museum, the Museum of Photographic Arts, Reuben H. Fleet Science Center and Museum of Art in Balboa Park. Passes can be obtained at any Macy’s store in San Diego County or neighboring Temecula and El Centro. For a complete list of participating museums, visit: www.sandiegomuseumcouncil.org.